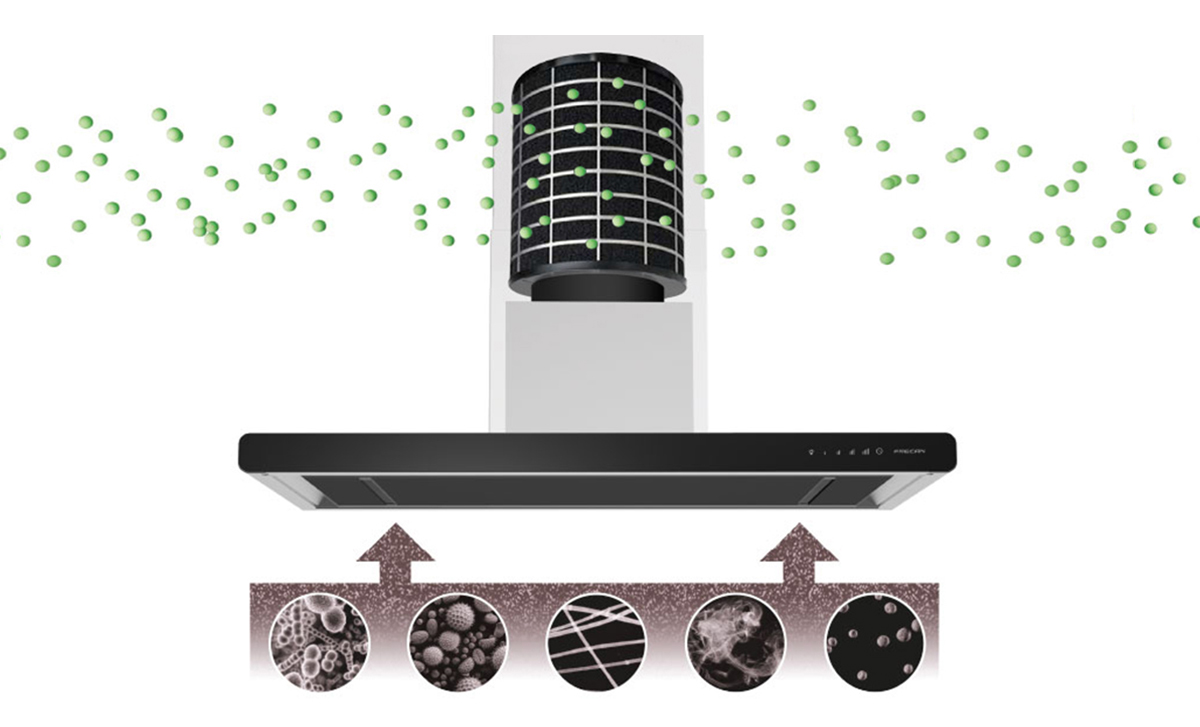 In spaces where people live, such as living rooms, bedrooms, offices and waiting rooms, the air contains all kinds of harmful substances such as bacteria, mold and viruses. The recirculation of air with the FRECAN Plasma filter separates and oxidizes germs and odors at the molecular level, producing oxygen, low humidity and CO2. It simply purify the air.

Although invisible to the naked eye, all spaces contain pollen, dust and other allergens. These allergens are not particularly harmful to humans, except when you have an allergy to them. The Plasma Frecan filter ensures the elimination of these substances from the air (dust mites, pollen, dandruff or animal hair).

Elements such as the sea, springs or waterfalls are a great source of negative ionization. The FRECAN Plasma filter also generates negative oxygen ions, providing a refreshing effect that improves concentration of both soul and body. It contributes to an easy relaxation, eliminate stress and anxiety, helps improve the memory, clear the mind and facilitates digestive and respiratory processes among many other benefits.
The negative ions reduce the tenor of the stress hormone.

With the FRECAN Plasma filter, unpleasant odors from cooking, tobacco smoke or the smell of animals become a matter of the past. FRECAN Plasma technology decomposes the odor particles immediately ensuring that the kitchen stays fresh.

Plasma Frecan filters have been developed to be installed in any type of hood.

A Safe process / A safe filter for health

The ozone concentration on the outside of the plasma reaction device is zero.
The electrodes have a very long LIFETIME and are almost indestructible in operation for which they are intended for domestic kitchen hoods.
The carbon filter in the final stage is regenerated in each process.
All of our plasma filters are VDE, IUTA approved for zero ozone emissions and have been tested for odor control (olafsense test)

The discharge piping will no longer be a limiting factor for your design plans. You will now have complete freedom to do what you always wanted.

The Plasma filter is regenerated automatically, so it does not require any maintenance or replacement whatsoever unlike the traditional carbon filters.
This is a long-term cost saving, as well as a guaranteed circular economy responsible with the environment.

Thanks to its conception, the FRECAN Plasma filter acts as a silencer, reducing noise up to 14%. Likewise, its installation system simplifies the ducting, reducing the noise generated by the air friction, especially in those long and intricate pipes.

Plasma is an electrical process

Our plasma filters host an electronic CPU inside the power supply that generates a high voltage field with very little energy. It is an electric, safe and controlled process that also reduces the cost of electricity by its level of consumption (3.5 Kw per year), as well as to avoid the loss of energy compared
to a hood with external discharge.

The air is filtered through the anti-grease filter in which fats and other heavy contaminants adhere. So follow these efficient house cleaning tips in order to have clean and safe home. From there the motor of the hood pushes them towards the plasma filter, which detects the air flow and activates automatically. It starts then producing a series of plasma discharges depending on the detected air flow. These plasma discharges modify the particles at the molecular level generating a chemical reaction that literally decomposes the odor molecules, pollen and other contaminants; and eliminates them.

In addition, the high content of active carbon retains and ensures the absolute elimination of any particle, transforming it into oxygen, CO2 and a small part of moisture.
The plasma generates this chemical reaction while the hood is in continuous operation. Thus, the pores of the active carbon filter remain always clean and free of polluting materials, allowing the use of the filter for much longer without any maintenance whatsoever.

Discover all our recirculation systems

You still do not know our new catalogue of extractions and cooking systems?

Meet Keops Prof, one of our newest additions to our collection.

Are you having trouble installing your ceiling hood? No problem!