Frecan is not only about design and silence, we work and develop easy-to-install systems such as Easy-Fix. 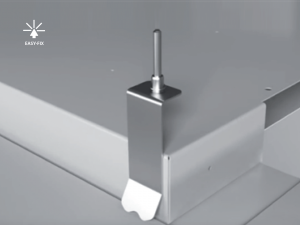 The Frecan family of ceiling hoods brings together a multitude of designs, but it is not all aesthetic design to our engineers. At Frecan, we also work and develop easy-to-install systems such as the Easy-Fix.

Easy-Fix allows you to install the hood easily and safely. It also allows you to instal rotary motors that allows you to place the smoke outlet in a way that avoids possible obstacles. Problems that we can find when installing the hoods to the false ceiling, as well as an air duct or simply the braces of the ceiling itself.

¿WHAT DOES THE EASY-FIX CONSIST OF?
The motor has four staples, once the motor has been raised and tubed, all you have to do is raise the hoods until the staples make a «clic».

Once the hood rests on the false ceiling, the 4 staples have to be screwed until the hood is flush with the ceiling. It is not necessary to exert too much force, since otherwise they can bend, even break the plasterboard (2 turns approx)

Mounting and dismounting, it’s just about to start 🙂

Discover some of our Frecan Ceiling hoods

TR10 Slim, designed to be installed flush with the ceiling, leaves room for more!

Frecan completes its offer by providing a selection of Induction hobs

Elegance and adaptability, meet TR9 Slim! An extractor hood that meets your needs.